My name is Elisa, I’m from Oregon and this is my testimony. I was introduced to the finished works of Jesus Christ 4 years ago while I was in the Washington psychiatric hospital.

I was 19 at the time and for the last 15 Years or so, I had been living a true life of bondage, torture and misery. I had been diagnosed with social anxiety disorder, panic disorder, major depression with severe psychosis and borderline personality disorder. I struggled with drugs and alcohol and addiction to self mutilation. I was heavily medicated with anti depressants, anti psychotics, hypnotics, and anti anxiety medications. A group of psychiatrists finally decided I had schizophrenia too.

Because of my “mental illness”, I Was unable to live a good life, could not finish school, work, live! I would cringe and dig my nails into myself to try to stop my self from hurting myself, but it only got worse with the years. Later I had lost all control. I frequently lost touch of reality, acted on rage and impulsively and had frequent suicide attempts. I have been hospitalized in every psych unit in Portland area. I had no hope, no future, and no life. I lived with post traumatic stress that would torture me in my sleep and while awake,

I lived a life of absolute fear, stress, and anxiety. Upon my what I like to call “treatment”, I was guaranteed that Jesus would set me free. I never forgot that. That stuck to me, no one had ever said that to me. Pat and another pastor, along with the support of a small church worked hard with me. I was determined and desperate! I could no longer live like this. With coaching, I learned to develop a spiritual understanding. To me this was all new, but that was ok. As long as I wanted out, I was going to receive what was guaranteed. On a daily basis i worked on my problems.

I gained trust, strength and power. I was beginning to get a hang on this. After resisting, resisting, resisting, I begun to overcome these oppression’s. Sure I fell a few times and felt like giving up, but I was always encouraged to get back up and fight!! I continued fighting the good fight. 5 months later, I was set free!!! I was not coping with “my illnesses, I was freed!! The chains were not loosened, they were broken off!!! I was free! Thank you Jesus! My life changed so drastically, it took me a year to finally accept it, to get use to living free! It was just too new, too wonderful, so rich.

I NOW LIVE A LIFE OF FREEDOM AND AN ABUNDANT LIFE, AND SO CAN YOU 🙂 It’s been 4 wonderful years of freedom, no coping, freedom! Thank you Jesus. 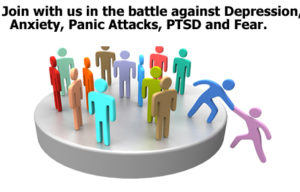 Register to receive all video and PDF teaching free.

Access to all training videos and e-Books free.
Be trained on how to set others free.
Join other Christian who are battling this oppression.
Discussions and questions about how to overcome.